In Roy Moore’s Shadow: Ten Commandments on the Ballot in Alabama

In electoral races across the country, the proper role of religion in public life has emerged as an area of concern for candidates and constituents alike. From the Trump administration’s radical redefinition of religious freedom to recent acts of violence against places of worship, tensions are running high as we approach Election Day.

But in Alabama, voters will consider a somewhat familiar question: religious displays in public spaces. Amendment 1 would amend the state constitution to permit displays of the Ten Commandments on state property, provided a display “complies with constitutional requirements.” 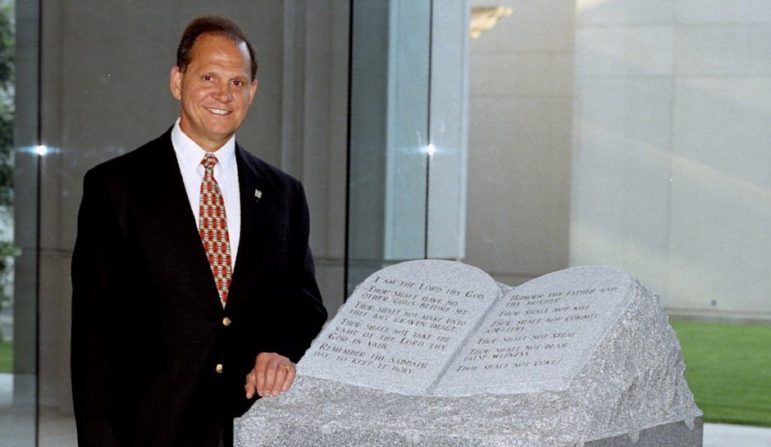 The ballot measure and its constitutional modifier draw on years of controversy surrounding failed Senate candidate and twice-removed Chief Justice Roy Moore. Before gaining national attention, Moore served on the Circuit Court of Etowah County, where he hung a plaque depicting the Ten Commandments in his courtroom and routinely invited Christian clergy to lead prayers. “I feel that I’m sworn to uphold the Constitution of the United States and the Constitution of Alabama, and those constitutions are founded upon a fundamental belief in God,” he explained, “My display of the Ten Commandments and prayer before sessions are simply acknowledgments of God.”

Moore was sued twice for violating the Establishment Clause of the First Amendment, sparking a conflict that ultimately reached the governor’s mansion. Gov. Fob James even threatened to bring in the National Guard to protect the plaque.

In 2000, then-Judge Moore mounted a campaign for Chief Justice of the Alabama Supreme Court, capitalizing on his fame as the “Ten Commandments Judge.” Once elected, he installed a two and a half ton Ten Commandments monument in the rotunda of the Alabama State Judiciary Building, proclaiming that the unveiling “mark[ed] the restoration of the moral foundation of law to our people and the return to the knowledge of God in our land.” Further litigation quickly ensued.

In 2003, the 11th Circuit held that the display ran afoul of the separation of religion and government. The court applied the constitutional standard set out in Lemon v. Kurtzman, requiring that the practice at issue have a valid secular purpose, not have the effect of advancing or inhibiting religion, and not foster excessive government entanglement with religion. Moore himself admitted the religious intent of the monument and would not allow any other items to be displayed that would detract from its overtly religious, pro-Christian message. The Ten Commandments monument, the court held, had to go.

The 11th Circuit’s decision caused uproar among Moore’s supporters and in the U.S. House of Representatives, which approved an amendment to a spending bill that declared no federal funds could be used to enforce the ruling.

Galvanized, Moore ignored the court’s decision and was eventually removed from his position for failing to comply with a judicial order. He would go on to be reelected and removed a second time in 2016, for refusing to comply with the U.S. Supreme Court’s decision on marriage equality. He then announced his candidacy for the U.S. Senate seat formerly held by Attorney General Jeff Sessions. 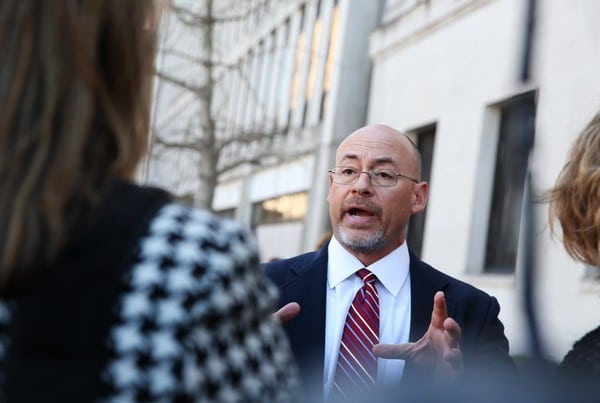 Moore ultimately lost to Doug Jones in 2017, but his Ten Commandments fervor lives on in Amendment 1. Dean Young, chairman of the Ten Commandments Amendment PAC, previously served as Moore’s chief strategist and says he has been fighting for its passage for seventeen years. In explaining his support for the measure, he asked, “Do the people of Alabama want to acknowledge God, the God of the Old and New Testament, the Christian God? Do we want to acknowledge the God that our nation was founded upon?” (Photo, left, via AL.com.)

Passage of Amendment 1 would inevitably prompt a new round of legislation, as the Lemon test has not changed since the 11th Circuit directed Moore to remove the Ten Commandments from the Judiciary Building in 2003. But this will be the first time that Alabama’s voters weigh in. As Young puts it, “Alabamians will vote, they will reckon on that day with God how they vote on this, that’s how serious this is. Either we stand for God or we won’t.”

Perhaps for some. But for everyone else, voters across the state will reckon with the wall of separation between religion and government. Either they’ll stand for it, or they won’t.